Ethan Sperry (MM ’98, DMA ’00) and Jason Saunders (MM ’14) were both awarded The American Prize in Choral Performance for their ensembles this year.

Sperry led the Oregon Repertory Singers to a win in the American Prize’s community chorus division. The Oregon Repertory Singers are a nonprofit organization that frequently presents regional premieres and works by local composers in Portland. Saunders’ ensemble, the Graham-Kapowsin High School Concert Chorale, won the competition in its high school division. The ensemble regularly performs in various festivals and competitions, and has previously earned top awards at the Anaheim and Seattle Heritage Festivals.

The American Prize Award is a series of non-profit national competitions founded in 2009 providing awards and local, regional and national recognition for individuals and ensembles. Awards are given in categories such as choral performance, composition and orchestral performance, among others. 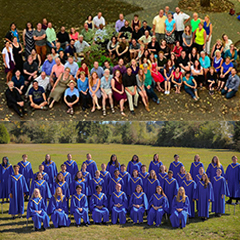