USC Thornton alumna Zhe Song (GCRT ’15) has joined the Spokane Symphony in Spokane, Washington as a second violin. A native of Tianjin, China, Song has trained as a violinist since the age of three. She began her training at the Affiliated School of the Tianjin Conservatory of Music before completing both her Bachelor’s and Master’s degrees at the Central Conservatory of Music in Beijing. Song then moved to the United States, where she received a Performer’s Certificate from La Sierra University and then a Graduated Certificate from Thornton. At Thornton, she studied under Bing Wang, Associate Concertmaster of the Los Angeles Philharmonic (LA Phil). 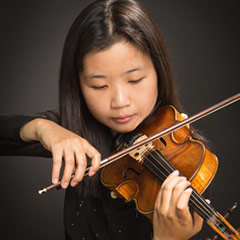