The Jefferson Symphony International Young Artists Competition has taken place since 1959, and rotates between piano and instrumental competitions every other year. It is a one-day competition that began as a local contest, but has since expanded to attract performers from around the world. Cravy was one of three finalists for the first place award — an $8,000 cash prize and a solo performance with the Jefferson Symphony. Earlier this year, he was also awarded second place in the Pasadena Showcase House Instrumental Competition. 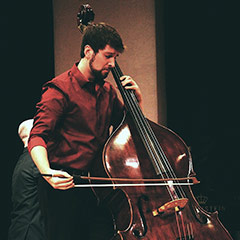