After the intermission of his May 15 recital at Walt Disney Concert Hall with pianist Kathryn Stott, cellist Yo-Yo Ma returned to the stage in an unusual wardrobe change, replacing his formal concert wear with a t-shirt. “I thought it was hot in here,” he said with a laugh, “and not because there are so many cellists in the audience.” His new concert attire was a shirt for the Piatigorsky International Cello Festival, which he called “a great festival” as reported by Strings Magazine. 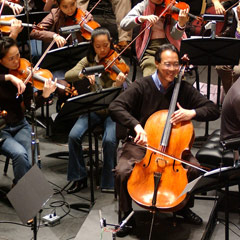