Gabriel Martins, a junior cellist at USC Thornton, earned a prize for the second year in a row at the Sphinx Competition, a national event for Black and Latino classical string players.

Last year, Thornton violinist Annelle Gregory (’17) won first prize in the competition and Martins placed third. Gregory, who studied with Glenn Dicterow, had been a semifinalist at the event multiple times before winning at the 20th annual competition.

In the competition at Detroit’s Orchestra Hall, Martins performed the Schumann Cello Concerto with the Sphinx Symphony Orchestra, an ensemble comprised of musicians from professional orchestras across the country.

“It is exciting to observe a young artist move so seamlessly from the studio to the stage of the symphony hall in Detroit, where on Sunday Gabriel gave a truly outstanding performance,” said Ralph Kirshbaum, the Gregor Piatigorsky Chair in Violoncello and Chair of Strings at USC Thornton, as well as Martin’s teacher.

Watch Gabriel Martin’s performance below at 29:30.

“Gabriel was polished, focused, and in complete control from the first note to the last,” Kirshbaum added. “He revealed heart, passion, intellect, and a finely-nuanced palette of colors in a compelling manner worthy of a seasoned artist.”

The Detroit-based Sphinx Organization aims to transform lives through diversity in the arts with a series of educational initiatives including educational programs and music curriculum for schools. For over 20 years, the annual competition has awarded classical string players from across the country. 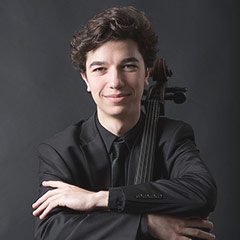