Samuel’s tenure at the Los Angeles Philharmonic began 25 years ago when she joined the Orchestra Operations department of the organization. Over the course of her career she has held a variety of critical positions, most recently as executive director. Previous positions include chief operating officer, which included management of the Hollywood Bowl and the Philharmonic orchestra and concert production; and vice president and general manager, Philharmonic and Production, managing the orchestra as well as all concert production, touring, and media activities. Early in her career, Samuel held positions with the Minnesota Orchestra, Yale University, the Tanglewood Music Festival and the Young Musicians Foundation.

Gail Samuel studied violin and earned undergraduate degrees in Music and Psychology and an MBA from the University of Southern California. She serves on the Board of Councilors for the USC Thornton School of Music and on the Board of Directors of A Noise Within theater. 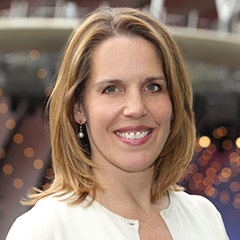