Harpist JoAnn Turovsky, who has taught on the USC Thornton Strings faculty for over 30 years, has received the Lifetime Achievement Award for her extraordinary service to The American Harp Society, Inc. Turovsky also serves as principal harpist with the Los Angeles Opera Orchestra, the Los Angeles Chamber Orchestra, and the Los Angeles Master Chorale and Sinfonia Orchestra.

Reflecting on her teaching philosophy, Turovsky notes that “First and foremost, we are all musicians and unique individuals. I strive to encourage, guide, mentor, and prepare young harpists for success in a rapidly changing world.”

In addition to her teaching and live performance work, Turovsky has participated in more than 400 film soundtrack recordings, including Avatar, Raiders of the Lost Ark, The Karate Kid and Toy Story. Eminent composer John Williams wrote a solo piece for Turovsky that was featured on the soundtrack of the film Angela’s Ashes. 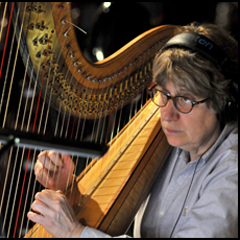