Musician, songwriter, and USC Thornton Popular Music faculty member Melissa Manchester recently premiered a new musical, The Sweet Potato Queens, at Houston’s Theatre Under the Stars (TUTS) Underground. Based on the well known book series by Jill Conner Browne, the musical tells the story of a woman learning to live on her own terms. The project is a collaboration between Manchester, lyricist Sharon Vaughn and Tony Award-winner Rupert Holmes, who were featured in an interview with Houston Public Media, discussing the work. The show ran through March 27.

Manchester, winner of a GRAMMY Award for Best Female Vocalist, has written songs for artists such as Kenny Loggins, Barbara Streisand, and Roberta Flack. She has also starred in Andrew Lloyd Webber’s Song and Dance and Music of the Night, held a recurring role on the television series Blossom, and starred in the film For the Boys. Manchester is currently on an international tour to support her new album, “You Gotta Love the Life.” 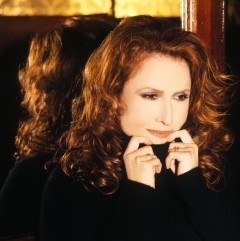