Oboist Allan Vogel, a member of the USC Thornton Winds & Percussion faculty, has retired as principal oboe with the Los Angeles Chamber Orchestra (LACO) after 44 years with the ensemble. Called “an aristocrat of his instrument, an oboe virtuoso with few equals,” by the Los Angeles Times, Vogel joined LACO in 1972 and was appointed principal oboe in 1974.

An instrumental figure in LACO’s Baroque Conversations concert series, which he said had “brought me some of the most meaningful moments of my career,” Vogel was featured as a soloist at the March 24th concert, which included Bach’s Brandenburg Concerto No. 2 in F major, a work he had performed with the orchestra 19 times previously. 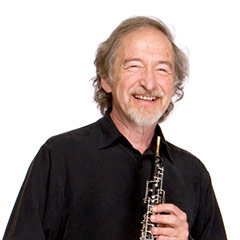