Rave reviews for Andrew Norman’s “Split” with Jeffrey Kahane and the N.Y. Philharmonic

“Can the young American composer Andrew Norman keep this up?,” is the question posed by the New York Times in its fervent review of Norman’s new work, “Split,” which he premiered with pianist Jeffrey Kahane, maestro James Gaffigan, and the New York Philharmonic on December 10. Norman, whose previous orchestral work, “Play,” is currently nominated for a 2016 GRAMMY award, composed the concerto especially for Kahane, his fellow faculty member at USC Thornton.

The Times’ Anthony Tommasini was keenly admiring of the new composition, noting that “Mr. Norman brings to his work an acute ear for sonority, along with a sure feel for musical architecture. During every teeming, discombobulating moment of ‘Split,’ you sense a composer in control.”

Justin Davidson, in his review for Vulture, wrote that “Norman’s piece invokes a world of fluid and fragmentary relationships, fueled by group chats and Facebook threads. A background of babble leaves room for moments of unexpected intimacy.” He continued, An overarching sensibility, a kind of trickster glee, glues the shards together, giving ‘Split’ a personality that feels, if not exactly unified, at least reassuringly whole.”

For the New York Classical Review, George Grella called Norman’s work “a dazzling listen and great fun throughout. … This is music that showcases smarts as much as chops and the performance made every detail of composition and orchestration clear, even as things happened fast and furiously.” 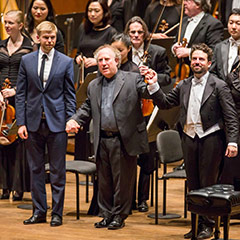