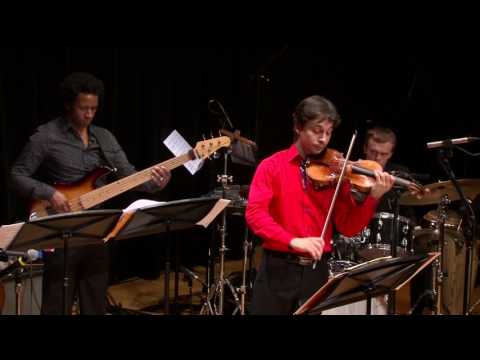 It took some convincing. Antonio Damasio, director of USC’s Brain and Creativity Institute (BCI), had a trumpet owned by Miles Davis as well as a painting by the legendary jazzman—a result of his ongoing research into the links between music and the brain—and a desire to inspire and initiate events in homage to the great musician.

Violinist Etienne Gara, a non-degreed alumnus and protégé of violin virtuoso Midori Goto, had worked with Damasio and the BCI previously in performances and other creative projects.

“Dr. Damasio asked for ‘something to do with Miles Davis,’” Gara recalled. “He had to talk to me three times before I accepted the project. I love jazz. I listen to jazz. But I don’t play jazz. I worried that I wasn’t the right person to do this.”

On Tuesday, October 24, the group presented the fifth performance in the setting of a workshop entitled Sketches of Miles: The Workshop — A Musical Project Designed Around Miles Davis.

The project is no standard jazz-classical mash-up. It’s a multi-layered fusion of disparate musical styles and backgrounds, melding composers and inspiration in the interest of generating creativity and breaking down musical barriers.

When Gara and Wurfl first mentioned the project to Rushen, she found the concept exciting but was also wary. “We’ve heard a lot of interesting combinations between jazz and classical and superimposing one thing on top of the next,” Rushen recalled. It took some time to find the right way to approach the music. “But when they went back to do more work, I said, ‘You know, if you’re going to visit the spirit of this, then I can relate to what it is you want to do.’”

In these sketches, the music of Bach, Bartók, Ravel and Debussy is blended seamlessly with Gershwin, jazz icon Joe Zawinul and, of course, Davis himself in an array of gypsy reels and funky dances. With the rules of classical and jazz composition being laid aside, Gershwin’s immortal “Summertime” can fuse with Debussy for a piece titled “A Summer Evening with Mr. Claude” or the music of Austrian keyboardist Zawinul melds with Bach to become “Silent Bach.”

In rehearsals, Gara would toss around images — Christmas-like as seen through the eyes of Tim Burton or a puppet dance on the frozen Red Square in Moscow — to help the musicians find their own desired musical color.

In the year they have been working on the project, Gara and his musicians have performed five concerts, the most recent on Oct. 24 at the BCI’s Cammilleri Hall. Following the concert, Damasio and USC Thornton Dean Robert Cutietta took the stage with the four musicians for a discussion about the process behind the performance. Whatever Sketches of Miles becomes, its creators insist that the ensemble’s process is about inclusivity.

“Instead of dividing and trying to figure out who the minority is, who has the rights in this society, I think Sketches of Miles is our musical answer,” Gara said. “This is research into ourselves and our meaning in society and what we can do. Instead of complaining, we can actually bring back something positive, something that matters and that is inclusive instead of divisive.”

“I think movements like Black Lives Matter or feminism among many others exist to bring awareness to the injustices that still exist in our society,” he said. “What I’m hoping is that we can soon enter the 2.0 phase of addressing the problem and aim for universal inclusion, a positive brotherhood between all humans, respecting and cherishing our differences for being enriching. It can sound a bit utopic today, but in our own musical way, that’s what we are aiming for through Sketches of Miles and its creative discovering process.”

While there may ultimately be a recording of one of the workshops, Rushen contends that the project is a work in progress that evolves at each concert as part of the creative process. Using musicians from USC Thornton and the resources of the BCI, she also views the work as research into the practice both of music and creativity in general.

“The Sketches of Miles project aims to be a model for students to remain inspired in their music-making,” she said. “I want students to be capable of following their own artistic creativity while being informed by the great traditions and teachings and developing a level of mastery of their instruments.”

Rushen points to the joy of the process—of exploring music with excitement, openness, and respect—as a way to transcend boundaries. “This is what this project represents,” she said. “The students of the world are more than ready for this, and an institution like USC Thornton is positioned to lead the way.”

“Continuing knowledge and education is a moving target,” Rushen added. “You’re supposed to evolve and you are supposed to allow for thought that takes you to a more progressive place. As the walls begin to come down and the lines begin to blur a little about what it means to be a musician, there should be opportunities to experiment and try new things.”