This examination tests general knowledge and skills in the area of music theory and analysis.The actual examination must be completed in 90 minutes and will be graded with PASS or FAIL.

In multiple-choice questions, there may be more than one correct answer. Respond by selecting all the correct answers
where appropriate. If any part of the answer is incorrect, the entire answer may be regarded as incorrect. As you complete each section, click the “Reveal Answer” button to check your work and get some suggestions for further study in that area.

Error Detection: Questions 1-5 refer to the example below. Indicate the problem(s) for each of the numbered places in the example. Problems may encompass the chord immediately preceding the numbered chord. Note that question 5 refers to both of the final two chords.

6. What pitch source is used in example A (above)?

7. The circled harmonies (a and b) in Example B (above) are best described respectively as:

8. From Example C, consider a hexachord A to be the prime form. How does hexachord B relate to hexachord A?

9. From Example C, the prime form of the first tetrachord of the row is:

10. Which of the following compositional characteristics are found in Example D above?

Download and print this music example to answer questions 11-17.

18. Continue the modulating 2-voice sequence (Download PDF) so that it leads smoothly to the concluding measures.

19. Identify and resolve each of the given chords. Provide key and Roman Numerals for all chords. (Download PDF) 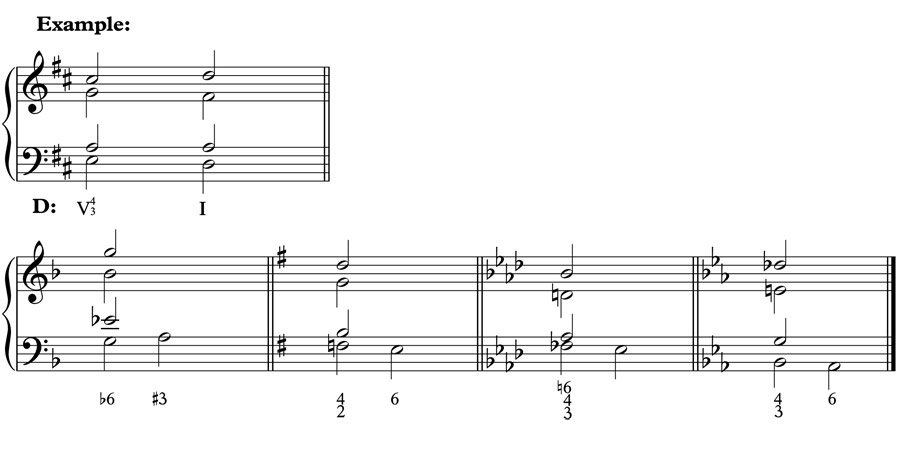 20. Add soprano, alto, and tenor voices as well as a Roman numeral analysis to complete the example according to the given figured bass. Your realization should demonstrate the voice-leading principles of the common-practice period. (Download PDF)